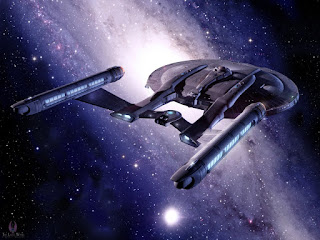 We are all together on Spaceship Earth, travelling with 30 km/s through the empty universe. One day, we Earthlings will leave our womb and start to colonize firstly the solar system. The reason for it? Simple, it is the next step in human evolution when conditions arrive that make the jump into space necessary for survival. A condition like an all devastating asteroid on collision course with our planet could be the trigger. The same counts for inviting alien messages containing revolutionary information from outer space. But more likely, the Earth is limited in resources and the Universe so big and so plenty full.

Next weekend (September 30 - October 2), the United States Defense Research organization DARPA organizes a workshop in Orlando, Florida on the 100 year starship study. The idea is that we start organizing for the jump to come. Some of the basic questions are: what technologies do we need and how do we organize ourselves?
My colleague and NewSpace Programme manager Robin Schoemaker is at the event and invited to share his vision during the conference forum. Robin is inspired by visionair Prof. Nico Baken who  came up with the theory of Holons. Holons are entities living on and producing three 'qualities': Energy, Matter and Information.
Below is a TED talk that Nico delivered at the TEDxAmsterdam event in 2009 on the Holon concept. Nico is also one of the advisory board members of the TEDxDelft event, that takes place in the TU Delft Aula Congress center on November 7.


It appears that using the definition of Holons, this is the ideal way to start organizing the Spaceship. In combination with the technology of 3D printing of all that 'matters', a Dutch partnership with the 100 year Starship Study is inevitable.
More insightfull why 3D printing (or layered manufacturing) is a key technology for future space exploration is demonstrated in the video below. It shows a 3D printer built out of LEGO parts, which is able to produce a LEGO house. Just imagine if you could make a machine that is able to replicate itself.  A miracle that life on Earth has already 'invented' a long time ago. By the way, this is also something that inspires TEDxDelft presenter Theo Jansen to make machines that live on beaches... Read more here!