TEDxDelft to the edge of Space, part 2 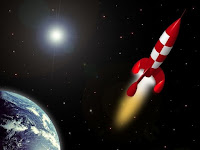 Human evolution made a quantum leap on October 4, 1957 when the former Soviet Union brought the first manmade artifact into Space: Sputnik. Although space is relatively close - the official altitude is a 1 hour highway drive up (96 km) - to stay there is pretty tough.
Balloons can get pretty high too. Tim Zaman (@tim_zaman) is a 22 years old student Mechanical Engineering at the TU Delft. In his spare time he sends balloons up in the air, dreaming about touching deep space. Tim will be launching one of his stratospheric balloons at the TEDxDelft event on November 7 in the TU Delft Aula congress center. The audience will hopefully experience a live feed from several tens of km above them. Check the Youtube movie below to get a glimpse of what awaits the TEDxDelft audience on November 7.


Really getting into space, and engineering equipment for this environment, requires 'just' a few extra steps. First of all, you need a velocity in the order of 7-8 km/s to just 'fall' behind the horizon, that's the reason for the big rocketry involved in Space exploration. Secondly, there is nothing there but utter emptiness, no air to breathe and no convection of heat and thus only isolation and radiation to use as mechanism to keep equipment cool. Thirdly, the full energy of the sun is present, where on Earth we are shielded by our atmosphere from the hazardous parts of the solar spectrum. Regular electronics will only work typically a few minutes up there because of the radiation environment.
An informative 'documentary' was aired by the Dutch Television program Labyrint on March 15 this year, exactly about what it takes to go into Space and comparing that with building a stratospheric balloon. Have a look here!