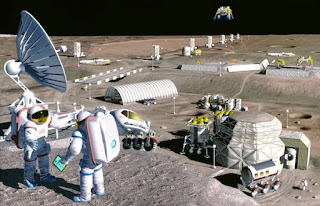 The International Astronautical Congress in Cape Town, South Africa was last week. This is the largest Aerospace congress in the world and is organized by the International Astronautical Federation (IAF). The nice thing of the IAC is that its technical sessions and 2946 participants cover the activities of the complete space sector, from governmental programmes such as the International Space Station (ISS) to the extremely commercial satellite telecommunication market, and from modelling the thermomechanical characteristics of rocket engines to the utilisation of Earth observation data for disaster forecasting. At the same level of the aforementioned diversity, is the level of being part of a bigger but uniting machine: a momentum wheel for sustainable development of humankind and its well-being on the fragile planet we live on.

One of the more crazier ideas at the IAC was pitched to me by a good old spacefriend who I know through my  International Space University (ISU) network, aka the space maffia. He told me about a company he is involved with, the Shackleton Energy Company. The aim of this company is to develop the commercial potential of the Moon by selling its resources. Their claim is that Lunar ice is widely available on or just beneath the Lunar surface and that by transforming this into liquid oxygen and hydrogen would mean the one and only thing needed to get around in the solar system: rocket fuel. The economics that would make this feasible is the fact that launching from the Moon to Earth orbit is much more easy than launching to Earth orbit from the deep gravity well that we experience on the Earth's surface. I did a little research on the internet into the Shackleton Energy Company and found that Dr. Bill Stone is the president of this company. He actually did a TED talk back in 2007, listen to his fascinating story below:


It is not a question if such an enterprise comes into fruition, but merely when. Before the sales of lunar originated rocketfuel can start, a huge investment is needed to create the enabling infrastructure in Earth orbit, Lunar orbit and on the Lunar surface.


How crazy this idea might sound, in its core, it is one of those ideas that should drive the global space programme because 'living of the land' has been good for exploration since mankind started to be curious. Undoubtedly, the technical challenges ahead in such an endeavor will spark innovation, as they always do when merely the impossible is being asked for.
Unfortunately, the biggest space programme of all, i.e. NASA's, is now driven by a number of senators in the US congress that want to continue employment at some Aerospace companies and institutes in mainly Florida, Alabama and Texas. Thousands have lost their jobs as the Space Shuttle retired in July 2011, after 135 flights in 30 years. Instead of supporting the unfortunate Shuttle workers by providing a transition into the rich number of new commercial initiatives for crewed orbital vehicles and rockets,  the senators have now 'ordered' NASA to produce a giant rocket to develop: the Space Launch System (SLS). This behemoth of a rocket will in the end be 130 mtr tall and be capable of carrying a majestic 130 metric tons into low-Earth orbit. Compare this to the most powerful launcher into play at this moment, the ATLAS 5 heavy with a low-Earth orbit capability of 'only' 29 metric tons. Why bother to make such a huge launcher if one can buy four ATLAS 5 rockets and have almost the same mass in Earth-orbit, although in an incremental way? The SLS is planned to make yearly flights from 2017 onward. The strange thing is that there is no funding and no plan on what to do with this rocket when it is ready or a fixed solar system destination. This lack of plan and destination will probably lead to killing the Senate Launch System after its maiden flight in 2017, and a resulting waste of tens of billions of dollars which could also have been spend on more sustainable developments. Below is an artist impression on how the biggest rocket ever will look like.


The SLS is now pitched to the public as the vehicle to bring humans beyond low Earth-orbit in the future. The question is whether that will ever happen and whether this could be the transportation asset that would eventually bring human presence to the Martian surface. The development and eventual use of this rocket does address in a technical way a key question in science and society: is there life beyond planet Earth? Both answers to this question, yes and no, are both equally intriguing. The answer 'no' would trigger a number of question and also disbelief: in this unimaginably huge Universe, how could planet Earth be the only place to produce life? If the answer is yes, one starts to wonder how this life would look like and work. Maybe something like the kinetic sculptors that come to life under the creating will of Theo Jansen, presenter at TEDxDelft on November 7?