TEDxDelft on the launchpad, ready for take-off 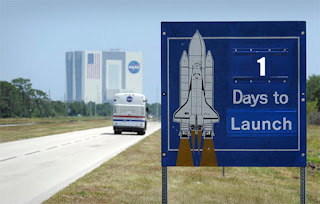 T-minus 1 day and counting: TEDxDelft is on the launchpad and go for launch! Organizing TED events are somewhat alike to launching people and machines into Space. Preparations start early and building, planning, testing and logistics are a state of mind. TEDxDelft mastermind Rob Speekenbrink and his team did a marvelous job. Monday November 7 2011 will be a day to remember for the TEDsters that will convene in the TU Delft congress center.

A few thousand kilometers from Delft, an important mission to bring back the first samples from the Martian moon Phobos is about to be launched at the same time. T-minus 2 days and counting: the Phobos-Grunt spacecraft is about to roar into Space on top of a Zenit-2 from the Baikonour cosmodrome. 200 grams of Phobos soil is expected back on Earth in a 11 kg capsule that will impact somewhere in the Kazakhstan desert in August 2014 . Measurements on this sample will reveal knowledge on how these Moons were formed and give insight in how our Solar system evolved through time. Also part of the 11 kg capsule will be a 88 grams canister, called LIFE, containing a number of resilient bacteria. The big question is: will they survive the journey from Earth to Mars and back?

Two other space missions are also on the launchpad. The Mars Science Laboratory rover Curiosity is slated for launch on November 25. One month later, outer Space will be the destination for Dutch cosmonaut André Kuipers. He will carry the Dutch torch of manned space exploration that ignited on april 29 1985, the day when Dutch-born American astronaut Lodewijk van den Berg left Earth and stepped into the Galactic sea of discovery. He will look back at this moment in time in his talk at TEDxDelft on November 7. See the countdown 'clock' here.