The spacey edge of TEDxDelft 2012: Mars One

"WTF, a sonic boom, a huge parachute and then some sort of skycrane over our head just put down a six wheeled machine on our surface" That is what the Martians thought on the late monday afternoon local time on August 6, 2012, just over a week ago. The impossible landing by the Mars Science Laboratory rover dubbed 'Curiosity' miraculously succeeded and fortunately did not add a 2.5 billion dollar crater to the Martian surface.  See below one of Curiosity's wheels in touch with the Martian soil, proof of this magnificent engineering feat. 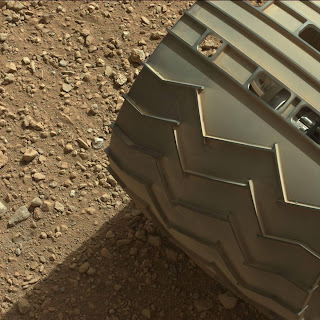 An important landing also for Bas Lansdorp, CEO of Mars One. His company aims to put humans, at their own will, on Mars by 2023 and through this create the biggest media spectacle planet Earth has ever witnessed by broadcasting the whereabouts of the explorers. Through the revenues of this media spectacle, the funding for the mission would be secured, and new explorers will be sent to Mars every 2 years. One of the reasons his endeavour is considered controversial is that the Mars One mission plans do not contain a return trip. The colonists should be prepared for a one-way ticket to another world. Opponents say it is unethical to send people on such a risky voyage to planet Mars, and have the general public look at them through the eyes of an interplanetary Big Brother. Supporters respond that there is also commercial activity around mountaineers eager to climb the highest mountains in the world, also claiming a high percentage of casualties. One difference of course, that they go with the intention to return to safe ground, quite different to packing your stuff and go to Mars... for ever. To my opinion, it is not a question of ethics but a question of WHEN humans will flee to Mars. And yes, let it be 2023! Bas revealed his plans just in the beginning of this year, and his media appearances have skyrocketed. I look forward to hearing his story life on stage at TEDxDelft on October 5 in the TU Delft Aula congress centre. I hope you do as well. If so, get your ticket to Mars here!