iPhone 5 is made in Space 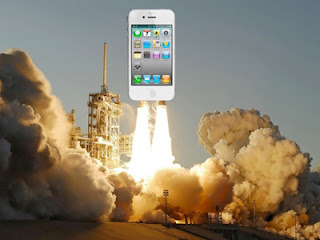 Apple released its latest innovation this month with the fifth edition of the iPhone. In a few months time, millions of people will carry this small powerhouse of connectivity in their pockets. At the core of the new iPhone is the new A6 processor, again more powerfull and less power hungry than the previous edition. This new processor obediently obeys Moore's law, that since its inception in 1965 has dominated the roadmaps of semicon research. This law states that the amount of transistors on an integrated circuit doubles every two years. There is an interesting connection between this law, microcomputers and the space programme.

Firstly, if it wasn't for the space programme, there would not have been the need in the sixties to develop a computer that would be able to fit size wise in a Lunar lander module and guide it to and from the surface of the Moon. After six succesfull lunar landings in the sixties and seventies, the cold war with Russia was basically won, the public lost interest and the Apollo programme was abandoned. Just a few years later, microcomputers appeared on the desks of households and companies. Apollo laid the roots for the first need for microcomputers where size did matter. Not to say of course that desktop microcompurs wouldn't have existed without it, but likely the introduction of the Iphone 5 would have taken another decade.

A second driver, but less known to the general public, can also be linked to the space programme. In the sixties, the Netherlands also embarked on the road to space, like many countries did.  The reason for the Dutch was strictly scientific. World class astronomers from the Netherlands had a need to look at the full electromagnetic spectrum of stars, outside the atmosphere such to have no absorption of Röntgen and extreme ultraviolet radiation. As a result, the Netherlands Institute for Space Research SRON and the Netherlands Organisation for Applied Scientific Research TNO started building up a significant heritage in space instrumentation with space telescopes like: S59, ANS, IRAS, ISO, Hubble Space Telescope and Herschel. That heritage still continues as Dutch space companies and institutes build space instrumentation for Earth observation and space science missions such as Tropomi on Sentinel-5P and SPICA-Safari. Over the years, a world class level of expertise was built up in the Netherlands on topics like cleanliness of optical active surfaces, vacuum technology, UV optics, systems engineering and high precision optomechatronics. In the nineties, this expertise proved useful for a company that was spun-out from the Philips group in the eighties: ASML. This company from Veldhoven in the Eindhoven region is all about lithography, a technique to 'write' ever smaller computer chip structures on Silicon wafers. The more complex and smaller the computer chip structures became, the more ASML started becoming dependent on a number of key expertises. It happened to be exactly the same expertises that were built up for getting the Dutch Earth observation and space science instruments up in space. The expertise was transfered from the space institutes and industry and now, ASML is a multi-billion euro exportgiant and world leader in chip manufacturing machines. The same machines used to produce the Apple A6 processors.

It can be concluded, not only from the examples above, that space programmes  have a specific characteristic in enabling crucial technologies for societal and economic benefit in the long run, often even beyond a point that their usefulness or applicability is evident. It is the unforgiveness and extremity of the space environment and its requirements that create a design environment where there is only room for perfect solutions. When things need to be absolutely perfect, often laws need to be broken, or new laws have to be made. Often laws that open up entire new and unforeseen technical possibilities.