The history of Mars Exploration started a long, long time ago. Ancient civilizations already dreamed about going to Mars and did extensive research concerning the movement of planet Mars in the Earth's sky. They also brought Mars to Earth by embracing it as a religious symbol in society, some for peaceful purposes but most for ruthless blood shedding in the name of the red planet. Through the times, Mars has had its definite influence in society. It is truly amazing to realize that only in our lifetime, mankind actually reached Mars by robotic missions. To support this amazing fact of mankind's achievements, here is my top 5 Mars Missions:

5) Viking 1
Viking 1 launched on August 20 1975. When Viking 1 entered orbit at Mars, it began taking pictures of the surface in search of a safe landing site for the lander. Mission planners were hoping for a July 4th landing, but the original site turned out to be too rocky. Another site was chosen and the first successful Mars landing took place on July 20, 1976, the seventh anniversary of the first Moon landing. Viking 1 landed in Chryse Planitia. The orbiter was powered down on August 17, 1980 after 1,400 orbits. The lander survived on the surface until November 13, 1982. Life was never found unambiguously by the Viking instruments, but the search continues. [edited from the Planetary Society website]
Amazing pictures returned from the Viking orbiters. Next to strengthening the knowledge about Mars as a planet, they also stimulated groups that considered Mars already habitated by Martians. They produced pictures such as below: 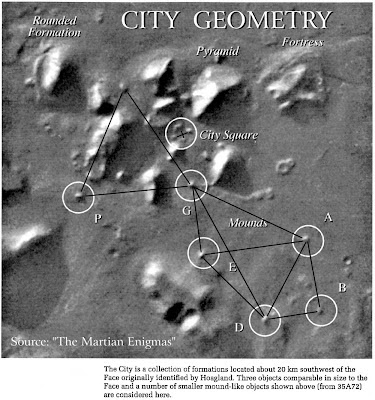 4) Mars Express
The European Space Agency ESA never really indulged in Planetary science in the previous century. That changed on June 2, 2003 when they launched Mars Express, an orbiter with remote sensing instruments. Mars Express is still alive and kicking in Mars orbit. Five days before arrival in Mars Orbit, Mars Express successfully pushed off the tiny, 30-kilogram Beagle 2 geochemical lander. Unfortunately the great succes of Mars Express has a dark side: the Beagle 2 was never heard from again. It most probably landed too hard, the victim of an unexpectedly thin atmosphere at the time of its descent. Pushing-off the Beagle 2 is one of those moments for me, where I know where I was at the time: with a terrible toothache, I was taking a course on Spacecraft Systems Engineering in Southampton, UK. The course was of course interrupted at the moment of push-off, and below is the image that we saw, of course without the text :-) 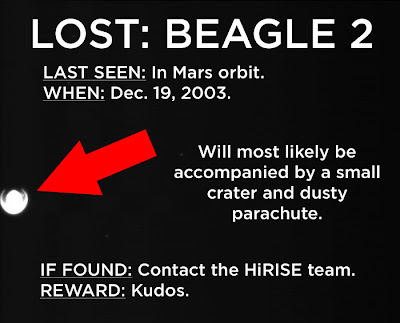 3) Mars Science Laboratory aka Curiosity
Fresh in everybody's memory is the landing of the Mars Science Laboratory, the biggest rover that ever landed on Mars. It dwarfs the previous rovers Opportunity, Spirit and the cute Pathfinder, as can be seen in the picture of one of my previous blogs.
Curiosity has just started driving. You should really follow the blogs by Dr. Inge-Loes ten Kate, a astrobiologist from Utrecht University involved in one of the key organic stuff seeking instruments on-board the rover.
Below is some of the amazing high-definition footage on August 6, 2012 from the camera on the lander.

2) Mars Sample Return
This mission did not happen yet but from the seventies onwards, the Mars Sample Return mission would always take place 10 years from now. I remember working on this mission for the European Space Agency in 2004. From my Torino based Dutch Space office at Thales Alenia I worked on the definition of the lander platform. The planned year of launch back then was 2013 but unfortunately: no, Mars Sample Return is not going to fly very soon.
Next to the important financial constraints of planetary exploration these days, part of the reason is the controversy behind the mission. Opponents with apocalyptic visions foresee extinction of the human species from the face of the Earth when Martian bugs would be brought back. More reasonable argumentation is the risk that in case just a dead rock would be returned to Earth, this would shut down any programme for further attempts to look for more lifefull places to return a new sample from. After all, bringing back something from the surface of Mars would be a risky mission for a relatively high cost. Below is a picture of the lander platform, launching the so-called Mars Ascent Vehicle (MAV). This MAV contains the sample that is collected on Mars and aimed for Earth. The current status of Mars Sample Return is that it is still the highest ranked mission in the influential Planetary Science Decadal survey. 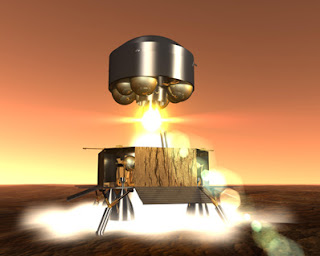 1) Mars One
Human steps on another world have already changed the 20th century, when Neil Armstrong gently touched the Lunar surface in 1969. Such moment will happen again this century, but then on even a more distant world: Mars.
There are basically two ways of sending humans to Mars:

Mars One CEO Bas Lansdorp will tell more about this intriguing plan at the TEDxDelft event in the TU Delft congress centre on October 5. Be sure not to miss it and book your tickets now! Watch the Mars One introduction below.