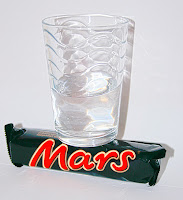 29 september 2015
Update! NASA has confirmed evidence that liquid water flows on today’s Mars. Read the full story. I also wonder if this news is being timed given the upcoming world premiere of 'the Martian'? I think yes. I also found some incredible footage of actual water flowing on Mars. Check it out on YouTube!

29 september 2012
Mars is as dry as a desert. The combination of the specific temperature and atmospheric air pressure of Mars only allows water to be present in a gaseous phase on the surface of Mars. The evidence is nevertheless piling up for a once wet planet. See the picture at the bottom about one of the most recent observations made by NASA's Curiosity rover. It looks very much like a dried-up waterbed. “This is a rock that was formed in the presence of water,” says John Grotzinger, project scientist for the mission. Water is of course a key factor for survival of humans once they get there. Manned missions will be a no-go when this water needs to be brought from Earth. The deep gravity well that we Earthlings are all stuck in is so deep that it would require a too large number of launches to get supplies like this into space and onwards to Mars. Hence, the research that Curiosity is doing now is very important for the company Mars One. This company aims to place humans on Mars by 2023 and pay for this through media exposure of the astronauts. How they will get their water is one of the main challenges. Will they drill for the Martian gold or will they try to extract it from the tenuous atmosphere? Let's see if TEDxDelft performer Bas Lansdorp has answers for that coming friday October 5 in the TU Delft Aula congress center. 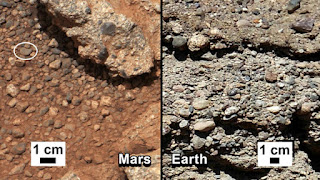