Interplanetary Abundance™ is a space resources trading game where virtual stock is exchanged between players, given predicted exchange rates communicated during the event. One of the space resources in the game is Helium-3. Read and watch more about Helium-3 below.

Helium is best known for giving you a funny voice when speaking after inhaling this noble gas. Helium-3 (He-3) is a non-radioactive isotope of Helium with two protons and one neutron in the nucleus. It is extremely rare on Earth, compared to the more abundant Helium-4, and it is sought for use in nuclear fusion research. It is produced as a by product in the decommissioning of nuclear weapons. The abundance of Helium-3 is theorized to be much greater on the Moon as the solar wind, containing Helium-3 traces, are embedded in the upper layer of Lunar regolith over billions of years.


In theory, Helium-3 can be used in a fusion reactor and provides an enormous amount of energy with respect to the small mass of the fuel needed. Such reactors produce heavier elements from lighter elements, just like the Sun and all the other stars in the universe are doing. The main bottleneck to get a fusion reactor going are the near impossible technical limits imposed on such facilities. The temperature at which a nuclear fusion reaction actually starts are in the millions of degrees Celcius. First challenge here on Earth is to fuse first some lighter elements such as Deuterium and Tritium (both Hydrogen isotopes). This reaction produces neutrons which will make the nuclear fusion facility radioactive within a few years of operation. Helium-3 can provide a much cleaner fusion reaction, but also requires even higher ignition temperatures, leading to even more extreme technology requirements for the fusion facility.
Below is a YouTube video where Apollo-17 astronaut Harrison Schmitt, propagates mining the Moon, and specifically Helium-3, for its resources. 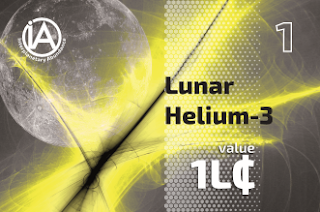