Interplanetary Abundance™ is a space resources trading game where virtual stock is exchanged between players, given predicted exchange rates communicated during the event. One of the space resources in the game is Martian water (H2O) and methane (CH4).

(H2O) and methane (CH4) on Mars are key to the survival of humans in space. Mars is the closest planet in our Solar System and most suitable for humans to live on as a multi-planet species. It is believed that a long time ago, there once were oceans of liquid water on Mars. Nowadays, the low air pressure on Mars would lead to quickly evaporating any liquid water present on the surface. Traces of water vapour can still be found in the Martian atmosphere, and with relatively low-tech equipment, one could extract this from the atmosphere.

As for methane, these traces are still somewhat of a mystery on Mars. They could be connected to subsurface bacteria producing methane, meaning life on Mars! Anyways, subtracting the methane from the soil would be of great economic value. Next to household use of methane in cooking and heating, methane can become an important source for the production of rocket fuel for use in solar system exploration. Actually, the water found on Mars could also be used as rocket fuel. What would be first needed is electrolysis of water, using electrical current produced with solar arrays, into hydrogen and oxygen. Burning these in a rocket could bring you back from the surface of Mars to Earth and might be of interest to the one-way-ticket settlers of Mars One.... 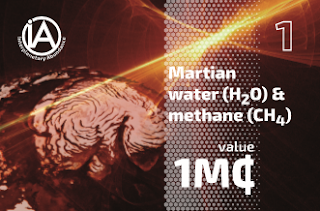