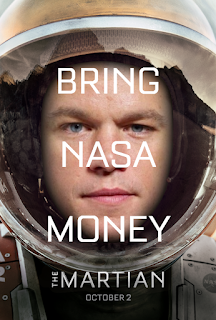 24 september 2015
Bring NASA money. A hope for space advocates fueled by the movie the Martian to be released on October 2. In the long foregone sixties, it took a short seven years between cold war induced political will and human boots on the Moon. Nowadays, in a risk averse world without political triggers for exploration, it takes a long seven years to plan a first test of a rocket that might never leave the launchpad.

But the question remains: could a movie actually have some influence on the directions of human space exploration undertaken by our governments? I found two sides on the answer. One critical piece written by Keith Cowing who curates the NASA Watch website. The positive story is a movie-review by Devin Faraci. I do hope Devin Faraci is right.

I just want to see human boots on Mars in my lifetime. But I am also realistic. A government led human mars landing has always been 25 years in the future. There is no business case for commercial enterprises to go there in the short run. The only commercial hope at the moment is Mars One of which I am skeptical their plans will work out, but I applaud them for their tireless effort and I support them where possible.

In any case, I am already sure I am going to enjoy this movie! Can't wait! And by the way, read the book first. My take is that the movie will be a more joyfull experience then.