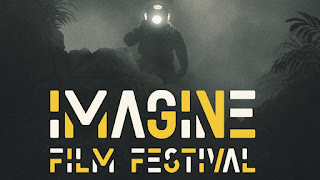 April 14, 2019 update! A wonderfull celebration of Cosmonautics day aka Yuri's Night was held in the Eye Filmmuseum in Amsterdam during the Imagine Film Festival on April 12, 2019. My presentation about Mars fiction and Mars science was well received. I showed movie fragments from the movies: War of the Worlds, John Carter, Mission to Mars, Red Planet, the Martian, Gravity, Capricorn One and Total Recall. All these movies have a relationship to our neighbour planet Mars and I discussed how these movie fragments sometimes were in contradiction with reality. After my presentation, there was a small break and the movie Aniara was shown. See the trailer below. Aniara is about a group of tourists on their way from Earth to Mars, but suddenly take a detour into the depths of our universe. A wonderfull hommage to cosmonaut Yuri Gagarin 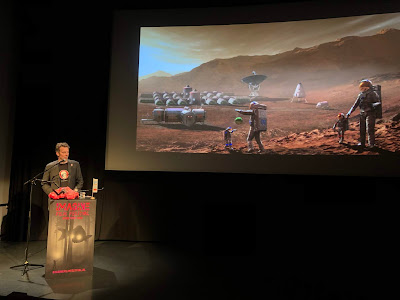 Coming to the Eye filmmuseum in Amsterdam, NL in April 2019 is the Imagine Film Festival. In 2018, I did a gig about the Russian epic space drama Salyut-7. This year on April 12, I will do a full hour presentation on Mars fact and Mars fiction. Buy tickets here!

In preparation for my presentation, I will be watching old and new Space movies. Luckily, my great and lovely wife Annemarie is also my fellow movie buff, so she is joining me on this tour of duty. This blog will document the Space movies that we will be seeing in the coming months. Tips are very much welcome (through @eriklaan for example), of course with the necessary opinions and your least and most favorite scenes! I have seen quite a bit already, but revisiting can also be nice. I would like to take a broad perspective on Space films first, and then narrow it more down to films about Mars or Mars as a background.

April 9, 2019: Finished my work on the presentation for April 12. It has become a 1.9 Gbyte powerpoint with HD movie items in there, thanks to the film engineers from the Imagine Film Festival. I will be showing clips from Total Recall, Red Planet, Mission to Mars, the Martian, War of the Worlds, Capricorn One, Gravity and of course John Carter! And all that mixed with the real science going on at our neighbour planet Mars!

March 23: John Carter. Fiction pur sang, but all in the background of Barsoom.. eh I mean of course the red planet Mars. The 1/3 Earth gravity of Mars gives our hero supernatural powers. And they don't need oxygen masks!


March 6: Aniara. Epic film about a journey of a Starship bound for the red Planet Mars. Will be shown at the Imagine Film Festival. Must see!

January 30: The Mars Generation - a Netflix orginal: documentary about experts and teenagers that want to colonize Mars. Nice balance talking to the kids with high dreams of going to Mars and the experts weighing in and making clear we are a long way from going there with the current political priorities we set with eachother. It was a bit on the lengthy side. The same message could have been provided in half the time. I thought it was refreshing for once to see an American production also show the dark side of Werner von Braun. He was not only the mastermind behind the Saturn/Apollo programme, but also the dark force behind the V2 missile that terrorized Europe in WW2

December 26 - January 10, 2018/2019: Mars. Mini-series produced by National Geographic. A group of astronauts makes the journey to Mars in 2033. The theatrical part is interrupted by the documentary part that takes place in 2016 showing the likes of space explorers such as Robert Zubrin, Elon Musk and NASA administrators. I did not like it this way. The Martian is much better as the theatrical part. The documentary part is nice but that was not what we came for. 2/5 stars.

December 25, 2018: Arrival. Twelve alien starships suddenly make a visit to planet Earth. A linguist and a physicist are tasked to find out why they are here. We liked it. 4/5 stars. There is a grey area in the movie where you suddenly realize the sequence of events. My wife got it first!