With the increasing surveillance of networks by nation states, and large tech companies keeping track of every move on the internet, a niche market emerges for self-sovereign global communication. Bitlinq's ultimate aim is to launch a small cubesat sized satellite with a payload containing a Cryptocurrency node, as a gatekeeper for a user programmable store-forward tranceiver. The Crypto Node in Space enables the service to become self-sovereign without losing a business model. Secondly, users on the ground can build their own user terminal from non-SatCom specific or proprietary components, which employs an unlicensed portion of the Electromagnetic spectrum for communication to and from Space.

Users within certain geofenced areas, enabled by donors to the Bitlinq Lightning Node (in Space), can use the system free of charge. An additional service being contemplated for further implementation on board the bitlinq payload, is a space based node for Self-Sovereign Identity (SSI) based on Decentralized IDentifiers (DID).

Working towards the ultimate aim of a dedicated satellite, the Bitlinq roadmap first uses existing services such as the Blockstream Satellite API for globally broadcasting user data, and the LoRaWAN Space gateway on board the M6P satellite in Low Earth Orbit (LEO). The combination of Blockstream Satellite with Bitlinq could create easy access to internet anywhere on the globe, within either firewalled regions or non-connected regions at all.

Contact CTO Erik Laan for more information, such as the Business Plan and the Investors Pitch Deck. 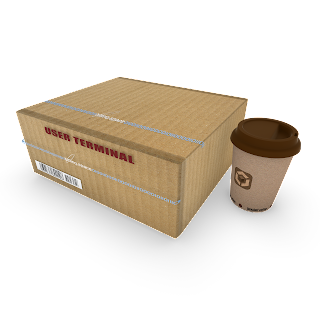 Update January 25, 2021: presented today at #TheThingsConference 2021 as part of the virtual booth of Lacuna Space. Below is a trimmed version of my presentation. Have a watch!
Update July 29, 2020: the Eye On Orbit teleport has gone through some upgrades and now features an all weather 24/7 capability to connect with the GEO Telstar 11N satellite. This satellite is one of the 4 satellites hosting the Blockstream Satellite service. In addition, the first Bitlinq ground server is installed. This server connects to the dish receiver for Bitcoin block updates to keep both the Bitcoin node and the Lightning Network (LN) node up-and-running. The Bitlinq Message Handler now automatically processes incoming messages from terrestrial LoRaWAN gateways and the Lacuna Space LS1 gateway payload on-board the M6P LEO satellite, and executes tailored scripts and pushes this to the Blockstream Satellite API for global broadcasting.
Work to be done in the next phase is further refinement of the scripts and boarding of customers that would like to make use of the Bitlinq services. 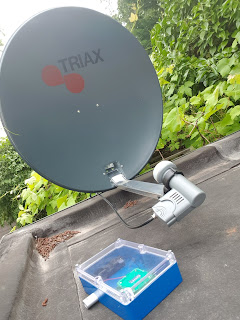 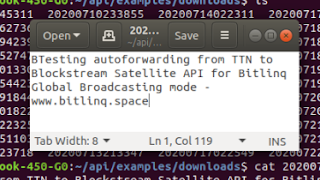 Update February 9, 2020: A second functional test has been performed for Bitlinq's Internet access usecase. A wikipedia search command was uplinked to the Lacuna Space LS1 satellite, using our LoRaWAN terminal, as part of in total 23 messages. The search command was downlinked to the Lacuna Space groundstation in Denmark and made available through the Bitlinq application running at the TTN (The Things Network). From there, the Bitlinq API queried the internet with the search command, and packaged the resulting webpage in a document for uplink through the Blockstream Satellite API. From there, the document was broadcasted over the entire globe, and we received it through our own dish pointed at the Geostationairy TELSTAR 11N satellite above the Atlantic Ocean.


Update February 5, 2020: Erik Laan teaches Precision Engineering classes at InHolland University of Applied Sciences. In the coming 7 weeks, students will be performing link budget analysis of our Lacuna Space IOT antenna and will be making a prototype of a 2-axis satellite pointer. See the first breadboard elements in LEGO below! 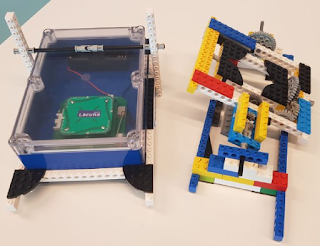 Update February 4, 2020: The first functional test for the Bitlinq service has been performed using the Eye On Orbit teleport. This test was for the Global Broadcasting usecase. Using a low-power IOT antenna from Lacuna Space, we were able to send over 35 messages to their LS1 satellite that was passing over the North Sea. These messages were downlinked to the Lacuna Space groundstations and then relayed to the portal of TTN (The Things Network). The Bitlinq API automatically selected one of them to push to the Blockstream Satellite API, that on its turn relayed the message to 4 geostationairy satellites for Global Broadcasting. Subscribe to this telegram group to to get the broadcasted satellite feed.

Update December 16, 2019: the Bitlinq project was subject of the radioshow Mediamix on Den Haag FM. Listen below to the (Dutch spoken) podcast made from this show.