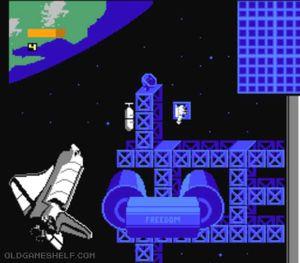 Video games provide an interesting perspective on  how Space is used in cultural expressions.

Recently I built up a new Raspberry PI 4 to become my household's game computer. Next to the obligated Mario, Donkey Kong and Sonic installments for my kids, I went on a tour through long forgotten gameconsoles. In my childhood I started out with a Philips Videopac 7000 and not long after, I jumped on the MSX-2 boat. Now with Retropie running on my Raspberry Pi, I could recreate those 2 oldies and experience again lots of other game consoles that I used to play at friends. I realized again that Space is such a great context for videogames. Unfortunately, this is often also in combination with shooting aliens and destroying asteroids. As an experiment, I went for a search of Space retro games with some realism included. The first game I stumbled into is the Space Shuttle Project for the Nintendo Entertainment System (NES) that was released in 1991. The objective is to fly the Space Shuttle into Space and execute all kinds of missions. It is really nice that lots of technical details and terms are correct. The gamedevelopers were clearly advised well. Check the longplay below.

A second game I found is called the Halley Project. The comet Halley orbits the sun and is visible from Earth every 75 years. In 1986, the European Space Agency ESA made a visit to the Comet with the Giotto Probe and made some scientific discoveries about its nucleus. So the timing was really great for 'launching' this game! The Halley Project game was developed by the French game company Mindscape in 1985. It first appeared on the Atari 800, and trying to get it to work on my Retropie was really a mess. I got it to work with an obscure emulator but then when my kids wanted to play Sonic on the SEGA Megadrive emulator, the whole controller configuration was messed up and I needed to reconfigure. Then I found the game was also available on Commodore Amiga and this was much more smoother to get to work. In The Halley Project, the player assumes the role of a star pilot whose mission is to travel between the various bodies of the solar system. The distances between worlds are realistic, their sizes reasonably accurate, and the task of landing safely often less than easy. Below you can hear the special Commodore Amiga song that was specially composed for the Halley Project launch on this computer.

Another classic is Lunar Lander. The first actual Lunar Lander game was actually developed back in 1969, the year of Apollo 11. It was written in the FOCAL programming language for the DEC PDP-8 minicomputer by Jim Storer. The real breakthrough for this game was in 1979 for the Atari console. Below you can see the screenplay for the MSX version from 1985.

A game that I have not yet managed to install on my Retropie is Rendezvous for the Apple II. This is a Space Shuttle Simulation game published in 1982 and developed by Titan Computer Products and NASA Scientist Wesley Huntress.

If you happen to know other Space Retro games in the same realistic genre as the ones in this blog, let me know in the comments as I want to play them all!

Oh, and did you know that Bitcoin legend Hal Finney was an Atari game developer back in the 70s/80s? Guess what he liked as context for his games? Yes, Space! Read an interesting interview with him back in 2006 here.

And also, this is wonderfull gem publication on the topic: https://archive.org/details/Computer_Space_Games